Nope, no balloons yet.

I let the curtain fall back and silently tiptoe out of the bedroom. At half past six this time of year the sun takes its sweet time pushing past the horizon and with it, the hot air balloons. They won’t be hanging in the sky for at least another hour.

In the coolness of the dark November morning, I grab a sweatshirt and two thick socks, hopping on one foot while putting them on, taking care not to bump into any plastic bins and cardboard boxes strewn about in the corners of the hallway. A mop, a broom, tape, and a bursting black garbage bag lay obediently on the ground just as they were left the day before in the frenzy of moving.

After the US’s travel ban was enacted in early 2017, we pieced together a sweet and simple wedding here in Turkey and moved into a 200 sq foot furnished apartment. Nesting our new humble home was pretty nonexistent save for a few picture frames and house plants (that may have caused a few arguments). We conceded to living among someone else’s couches and dinner plates and made it work with a dorm sized refrigerator and a bedroom with no window.

This was all well and good because in the next two months — three tops — we’d be gone. This administration is crazy right now but they’ll figure something out. They can’t do this forever, right?

The oversized suitcases perched on top of our wardrobe served as a reminder of the state of our hearts. We were in route, a short stopping point along the way. Roots shallow and our minds in another part of the world. This is just a minor blip in the plan. No big deal.

It didn’t happen all at once, like a ton of bricks hitting my chest. It was more of a slow realization, a gradual drip of understanding that, yes, this was a big deal. And, now 18 months later, we’d probably be here a lot longer than we imagined.

As the brewing of the coffee slows, I fish a mug out from one of the cardboard boxes and lift off the week-old newspaper surrounding it, serving as a temporary protection while it jostled in a van across town.

I glance at the inked headlines before crumpling it up into the garbage. “CRISIS AT BORDER”, “CALIFORNIA SHOOTING KILLS 12”, “FIVE MIGRANTS DIE AFTER BOAT SINKS OFF TURKEY”

My heart heaves a heavy sigh as it thumps with anger and disappointment. Our prayers aren’t working. Things are getting worse.

I look around at the boxes and plastic bags – so many plastic bags that I’m sure they’re multiplying – dirty rags and cleaning bottles. Did we make the right decision? Our move shows that we are reluctantly planting roots and watering it with couches, kitchen gadgets, and bedding. Is this a surrender?

It seemed appropriate that the last morning in our studio apartment was the first day it snowed here. It wasn’t much and it melted as soon as it hit the ground, but it felt like a silent signal of the changing seasons, those strange few weeks that squeeze themselves between autumn and winter.

We find ourselves saying “happy and sad” a lot in our conversations. Feeling the tension of juggling two opposite emotions. And we now feel the balancing act of wanting to push forward and move on coupled with the roots that are sprouting from the soles of our feet.

While not yet Thanksgiving, the approaching holiday season is before us as is the coming of the birth of Christ. Advent. A time of looking forward with anticipation to the Messiah as the baby in Bethlehem. It’s a season where our hearts yearn for Christ to come and set things right – in our messy selves and in this broken world.

I think there’s a lot to be said on how the God of the Universe sent his only Son into the world. Here, in this mess, to live and dwell among us. God’s heart is to renew all things. Everything he does is backed by his desire for redemption. As I read the angry, screaming headlines while unpacking our belongings in our new and less-temporary home, I know that Christ is here with us and will one day set things right. We all find ourselves feeling the tension of the already and not yet of the Kingdom.

There’s something about moving that forces us to reevaluate and re-rhythm our life. With the plastic bins, painters tape and the sharpie scratched across, we are forced to throw out the things we no longer need and keep and treasure the things we do. There are new routines to figure out, like when and how often to do laundry (and to be strategic when washing when there is no dryer).

It’s an opportunity to re-rhythm our hearts too. Throw out the bad, hold fast to the good. While we prayed a lot about the decision to move, I still felt shaky. I felt shaky even when we made the countless trips down three flights of emergency exit stairs, carrying mirrors and plants and boxes. I felt shaky when we closed the door to the tiny space that was ours for a year and a half.

This isn’t the move we have been praying and hoping for. We don’t want to move across town; we want to move across the world. This new apartment is more expensive. How are we going to pay the bills and the heighten electricity costs? Thoughts of uncertainty swirled in my brain.

This morning though, as I stood in our new kitchen, looking out at a new and unfamiliar view, I felt the Lord whisper the beginning lines of Psalm 23: “The Lord is my Shepherd. I shall not want”.

I shall not want. I will lack nothing. God, with his father heart, is my shepherd. 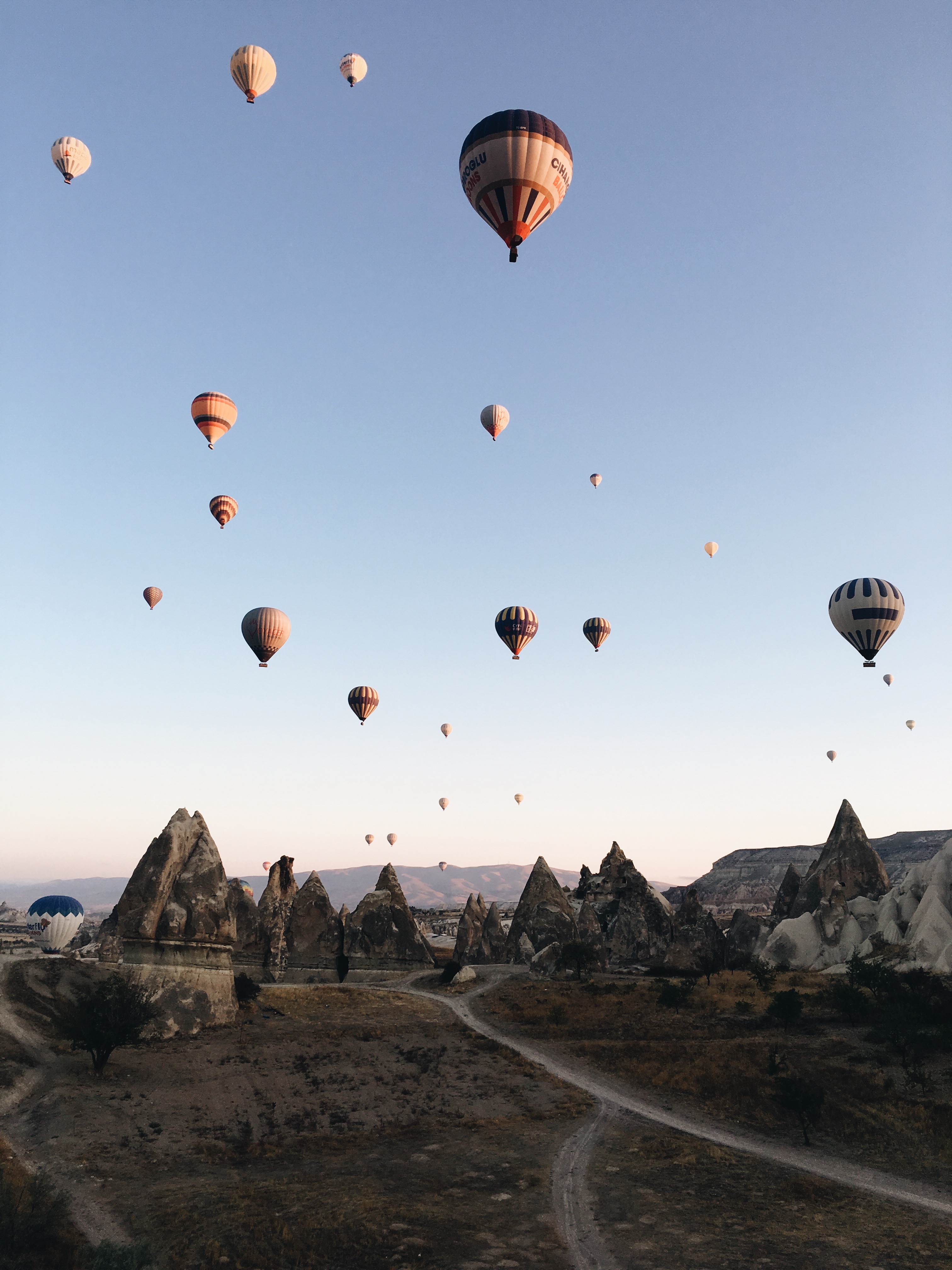 “There has to be at least 50!” I’m back in bed with my husband now, second cup of coffee in hand and he’s counting the balloons from our window. The curtains have been pushed back and the lazy sun has begun to make an appearance. All at once, it seems, bursts of colorful balloons suspend low in the sky. It’s still dark enough to see the giant puffs of fire surging up into the hollows of the balloons. I curl up under the blankets thinking of the eager tourists braving the cold morning air, 20 clustered into each basket.

Deciding to move was a huge leap of faith. It’s not what we wanted to do, but we trust that God is bigger than we can understand and we know that Christ is near. Our step of faith made however reluctantly won’t go unnoticed. Things will be made right.

For now, we will enjoy the view.

Nine months of loving you, my sunshine girl ☀️💛
Just a little snapshot of our day today ☀️
Lately we’ve tried to make it a point to get out of the house on Fridays since we’re still in lockdown each weekend. We get outside, grab take out for dinner, call grandma before bedtime, and hunker down until Monday. Today we pulled over to get some photos in the snow ❄️
My girl ☀️
A lot of my favorite things in one square
💫🥰
Loading Comments...
Comment
×